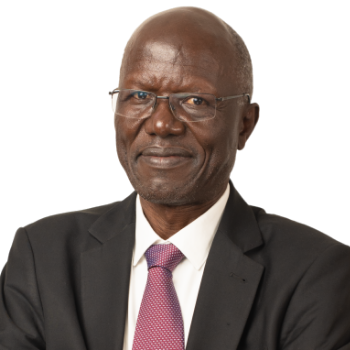 George Oraro is the Founding Partner at Oraro & Company Advocates. With over 46 years of experience, he is held in high esteem for his arbitration, mediation and litigation expertise in Kenya. He specialises in administrative and judicial law, banking & commercial litigation, corporate & commercial law, employment and labour disputes, international trade and tax disputes.

He has practised in the International Criminal Court, the London Court of International Arbitration (LCIA), International Chamber of Commerce (ICC), the Supreme Court of Kenya, Court of Appeal, the High Court, Employment & Labour Court, and various Tribunals.

In 2012, George was conferred with the rank of Senior Counsel for his exemplary service to the legal profession. He was also appointed to serve as a Commissioner of Assize to assist in expediting and determining criminal and civil matters. Similarly, in the Chambers Global 2021 Guide, he retained the prestigious ‘Star Individual’ accolade in Dispute Resolution which is accorded to lawyers with exceptional recommendations in their field. George remains the only lawyer ranked in this category in Kenya. He is also ranked a Band 1 lawyer in Dispute Resolution: Arbitrators, receiving a plethora of praise from the Kenyan legal community for being “one of the best lawyers Kenya has” and “without a doubt among the leading individuals in litigation and arbitration.”

In addition, the Legal 500 listed George among Africa’s leading arbitration practitioners in its Arbitration Powerlist: Africa 2021.

Aside from his legal practice, George has served as a board member for the CMA in which he was instrumental in the development of the legal and regulatory framework for the Capital Markets in Kenya. He was also a member of the Nairobi Securities Exchange Technical committee. In 2015, George became the first Honorary Consul for the Republic of Lithuania.

"without a doubt among the leading individuals in litigation and arbitration"